Code 3 Air Conditioning and Heat is proud to provide world-class AC and heating service in the City of Allen Texas. Whether it be for a simple tune up, a major repair or a total system change out, we’d love for you to see why we have been voted one of the top HVAC companies in town.

To maximize the life of your HVAC system, it’s important to keep all of the components well maintained. We’ve seen too many weekend experts try to perform a repair after watching a couple of YouTube videos and buying some cheap parts online. We don’t want you to put yourself or your family in harm’s way. We’ll cover some simple ways to keep your system running as efficiently as possible to reduce the need to call for repairs to your AC system.

We specialize in service calls, repairs, and new installs for both residential and commercial properties across the north DFW area, Allen and surrounding areas. Our commercial services page has further information.

If you’re looking for an affordable and reliable HVAC company near you, this can be a bit of a challenge. We know you have a choice when it comes to choosing someone to work on your electrical items. When you pick up the phone and call us, we’re going to earn your trust and get your home running nice and cool in as little time as possible.

Code 3 Air Conditioning and Heat has been serving the Allen TX area for years and we have become very familiar with the different types of systems installed in our homes and offices. We often find that an AC unit will last about ten years before you should consider replacing it. Some will last a lot longer depending on the brand and how often it’s used. The heating elements can last several more years.

Here is a partial list of the types of services and issues that we can take care of in your Allen home or office. 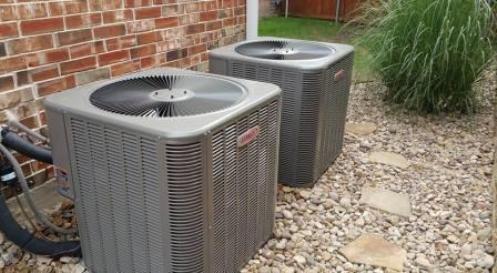 Preparing your System for Summer

Summers in north Texas can be brutally hot, and this year will be no exception. With average temperatures expected to hover in the upper 90’s for a few months, your AC units will be tasked to keep your homes and offices cool.

At Code 3 Heating and Air Conditioning, we recommend having us come out and inspect your units when we start to see temperatures in the low 80’s, i.e. when your AC has been turning on for a week.

It is also important to change out your filter every month, or if you have a larger 4 inch wide filter, every 3 months. You’ll be surprised how much dirt and dust is captured over a short time. If you have cats and dogs in your house, there will be a lot more fluff accumulated in the filter.

When we come out to your home for a seasonal checkup, not only will we check your filters, but also your entire system end to end. It’s important to have this done early in the summer in the event your AC decides to break down on a Friday afternoon right before a long weekend! Nobody wants to come home to a warm house and then have to wait for an HVAC company to come around on Monday. 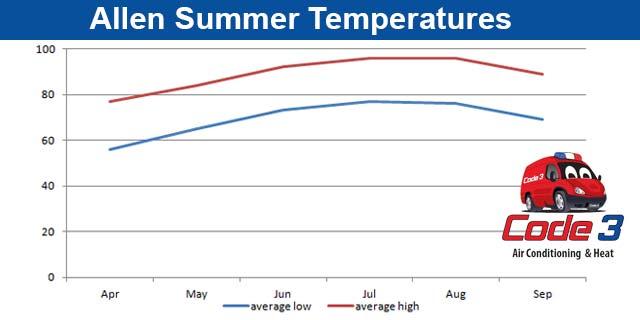 Preparing your Heating System for Winter

Winters in Allen are typically quite mild, depending on your frame of reference! Mild, meaning that the heating part of your HVAC system doesn’t run for as long as the AC components in the summer.

Nonetheless, we need to stay warm inside, whether it’s below freezing, or 50 degrees. Average low temperatures can hover around 40 degrees. We’ll occasionally get colder snaps and freezing rain which means the heating will be running longer. All the reason to make sure your system is tuned up for the winter months.

We can check the operation of your heating system before it’s needed as there are less parts involved compared to when the AC is running. For example, the compressor (the large unit outside) does not run when the heating is on.

The other thing to watch out for is a build up of carbon monoxide gas if your system is not properly venting. This can be harmful to pets and humans alike, which is why we always recommend a winter system checkup.

The only active parts of your furnace that run in the winter time are the air handler (which blows warm air through your ducts) and the gas furnace which ignites natural gas to produce heat. Some systems have an electrical based furnace, which heats up coils of wire much like a floor standing electric heater. If you have the option, always use your natural gas furnace as it’s much cheaper to operate.

Even though the system doesn’t run as often as in the summer, it’s still important to change out your filter every month, or if you have a larger 4 inch wide filter, every 3 months.

When we come out to your home for a seasonal checkup, not only will we check your filters, but also your entire system end to end. It’s important to have this done before the colder temperatures hit in the event your heating system decides to go on vacation right before your family comes into town for the holidays! Nobody wants to entertain friends and family in a frigid cold house while they wait for the heating company to show up on Monday. 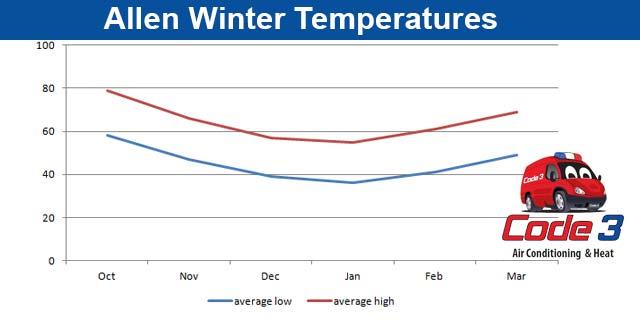 We service HVAC systems across all of Allen

Useful Info about the city of Allen

Allen is a city in Collin County in the U.S. state of Texas. The population is approximately 90,000.
It is bordered to the north by the Sam Rayburn Tollway, aka SR121, Frisco and McKinney. To the west and south, it’s neighbor is Plano and to the east you will find Lucas To see a visual representation of the city of Allen’s borders, click this map link

Allen has a Chamber of Commerce at 210 W McDermott that is frequented by local business owners. The website is http://www.allenfairviewchamber.com/ The meet weekly and provide a lot of assistance and support for aspiring and established business owners.

The Allen Convention and Visitors Bureau helps promote the city to its visitors by partnering with local establishments such as restaurants, retail and entertainment venues.

High school football is a huge deal in Allen, which is home to the five-time state champions, the Allen Eagles. They play at Eagle Stadium, which was opened in 2012 and seats 18,000 fans. On Friday nights in Allen, you can count on hearing a lot of “A-UP”s from Eagle fans old and young alike. Across the road is the high school, which is home to approximately 6,000 full time students. The Allen Eagles have won the high school state championship in their respective division in 2008, 2012, 2013, 2014 and 2017.

Celebration Park is a large outdoor park that often hosts festivals such as the 4th of July festival. It sits at the east side of Allen just north of Main St. It also has indoor bathrooms and is family friendly. You’ll often find people playing soccer and basketball or running at this park. There are playgrounds for the kids as well as a splash zone for the young at heart.

The History of Allen

In 1872, the Houston and Central Texas Railroad created the city of Allen, which was named after a Texas politician called Ebenezer Allen. In the 1800’s, when the railway ran through Allen (it has been out of service for decades), it allowed the sale of farm good such as crops. Previously, this area was more known for its cattle farming.

One of its claims to fame is that it was the site of a train robbery in 1878 with Sam Bass, widely thought of as the first time a train was robbed in the state of Texas.

In 1953, Allen was finally incorporated as a city.

With the building of highway US-75, the population has grown dramatically, forcing the city to build a brand new high school. Allen ISD has a total of 23 schools, from elementary to high school to support its large student base.

We are dedicated to providing the highest quality AC and heating repairs and installation service at the fairest price to homeowners and commercial customers throughout the DFW area. Our team of highly trained and experienced technicians will work within all local and state regulations to see your project through to completion.

By using the latest HVAC technologies, we’re able to keep our customers cool in the summer time and warm in the winter by supplying them with a system that is installed right the first time, on-time, and within budget.